We are celebrating our 5th anniversary as car-sharers. Back in 2012, we had recently welcomed our first child into the family. Was it time for a larger, safer vehicle? A mini-van, perhaps? Naw, we decided to ditch our vehicle entirely and join Modo instead.

And so the experiment began. We decided to see how long we could last without a vehicle in our parking spot. Our big questions were:

Here are the results of our 5 year experiment.

As mentioned in an earlier post, we owned a 1997 Cavalier. It didn’t have a lot of bells or whistles (neither, actually, and manual windows/locks) but it served us well until it eventually fell apart.

Our AirCare reports confirmed that we were driving significantly less after moving to Vancouver: only 3,500 km per year versus about 15,000 before (which is around the Canadian average). But even so, we suspected we could reduce that further.

Since the car-sharing switch, our annual usage has been fairly consistent: far fewer trips and kilometres and with more efficient vehicles. Our car-related emissions are roughly 1/10th of what they had been. Obviously this isn’t comprehensive in terms of all forms of transportation, but it’s important to note that we used bikes and transit even when we had the Cavalier.

Let’s break this down by car-share.

The original Vancouver car-share, Modo is definitely our mainstay. Most of our ~600 kms per year are in a Modo vehicle of one kind or another. On average, we make 2 bookings and spend $50 per month. We have driven on average 11 different vehicles per year with 50% of bookings on hybrids. We tend to favour the Prius because there are a few nearby.

During our first year, 30% of our bookings were for (non-hybrid) electric vehicles. The car we used the most was the 2011 Leaf, which was a huge upgrade even just in terms of features (backup camera etc), never mind the efficiency of 100 mpg. However, the Leaf was moved to a location further from us and we stopped booking it as much.

The flexibility of Modo can’t be beat. Here are a few of our most memorable trips:

When we get a car, it’s an event for our kids. They love guessing which colour car we’ll get this time. They also love pointing out every Modo car they see around town.

Of course, it isn’t all rainbows and unicorns.  I remember the time one child threw up all over the back seat. Although Modo has staff to look after the regular maintenance and cleaning of the vehicles, that time we had to clean up before leaving the car for the next driver.

We signed up for one-way car-sharing with car2Go in 2013. For most of the past 5 years, the only car available has been the 2-seater fortwo so we haven’t used it quite as much.

We find car2Go shines for catching a ride home late at night when it has started raining (happens often enough in Raincouver), when we want to get to a show on time (date night!), or when in an area of the city not serviced well by transit. As you can see from the summary above, our trips tend to be quite short.

With the introduction of 4-door car2gos, this is starting to change. For example, when we needed a one-way lift from the Via Rail station with all our luggage this past summer, we were quite happy to grab a new Mercedes-Benz CLA. That said, David was quite unhappy with the GLA when he tried it out recently. What was supposed to be a quick trip took much longer because it seemed the various controls were in unexpected locations.

One gotcha with car2go is a $1 per booking “driver protection fee”, which Evo does not have. 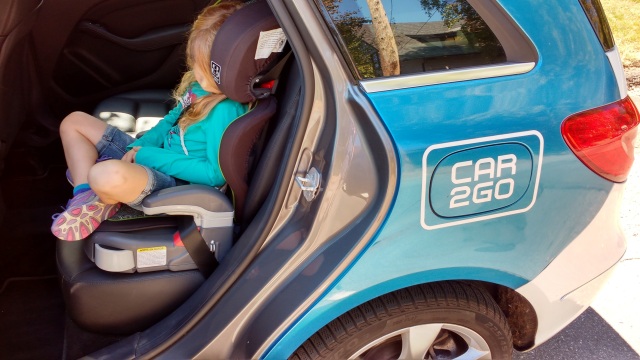 Relative newcomer Evo offers one-way car-sharing with a fleet of Prius Cs. We signed up when it launched in 2015.

The trips that we use Evo for the most are getting to/from the airport via the Park-N-Fly (when we have too much luggage to take Canada Line) and driving David’s parents home at night after babysitting. However, David recently costed out whether Evo is the best option for the latter trip and it turns out that Modo is the cheapest option despite the short duration.

Even though we don’t use it often, we love having Evo as an option.

Car-sharing has saved us some money, but we care less about this than we originally thought we would. We see car-sharing as a premium service that reduces stress in our lives and encourages us to be active. In other words, even if it cost more than owning (and maintaining) our own car, we would probably still choose car-sharing because of all the perks. (Shh, don’t tell the car-sharing companies.)

As already mentioned, sharing cars has definitely reduced our emissions. But is it more convenient? Well, yes and no.

As a family with youngsters, it’s decidedly inconvenient to have to install and remove car seats. Then again, we’ve had lots of practice and our kids are graduating into booster seats. Quite frankly, we’re happy there’s a barrier to us jumping in the car because that means it’s not our default choice. We would much rather bike or take transit when it’s feasible. Other families in Vancouver seem to agree.

On the other hand, car-sharing is more convenient than traditional ownership in terms of having access to a car anywhere in the city and being able to choose our vehicle based on passengers, cargo and even mood. Oh, and let’s not forget the long list of inconveniences we (mostly) no longer need to worry about: insurance, parking, cleaning, oil changes, fill-ups, etc.

Another perk is that our cars auto-upgrade. It’s not unusual for us to book a car and be greeted by that distinct new car smell. We’re particularly looking forward to sharing a Tesla Model 3 when Modo’s arrive in the next year or so.